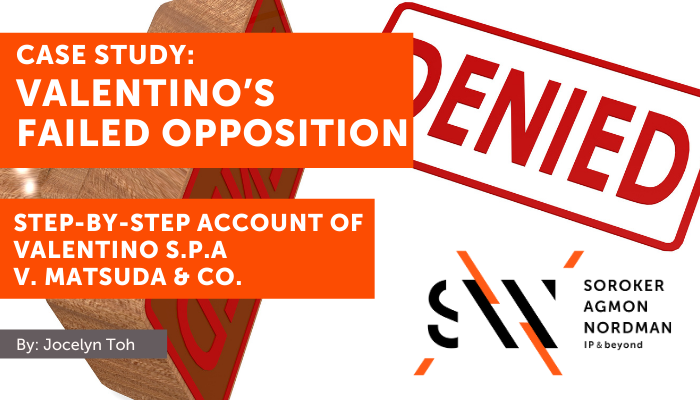 Background:
The case before the Singapore IP Court concerned an opposition by a VALENTINO S.P.A (“the Opponent”) against Matsuda & Co (“the Applicant”) for marks which contain the word “VALENTINO”. It is well-established that “VALENTINO” is a relatively common name (Valentino Globe BC v Pacific Rim Industries [2010] SGCA 14 at [49]).

As pointed out by the IP Adjudicator, “[w]here a business chooses as its trade mark (or one of its trade marks) a name, whether a given name, a surname or a combination of the two, that choice comes with a risk: that others may be able to use it (or them) in good faith without impinging upon the trade mark owner’s rights.”

While the Opponent cited thirty-three earlier marks in support of the opposition, it largely relied on the three marks below and primarily the third mark that is identified as the “Opponent’s Composite Mark”. The disputed marks are as set out below and relate to, inter alia, leather goods in Class 18 and clothing in Class 25.

The Opponent raised the following grounds in opposition:

The IP adjudicator considered and dismissed both grounds for the reasons below:

Result:
The opposition thus failed on all grounds and the application is allowed to proceed to registration.