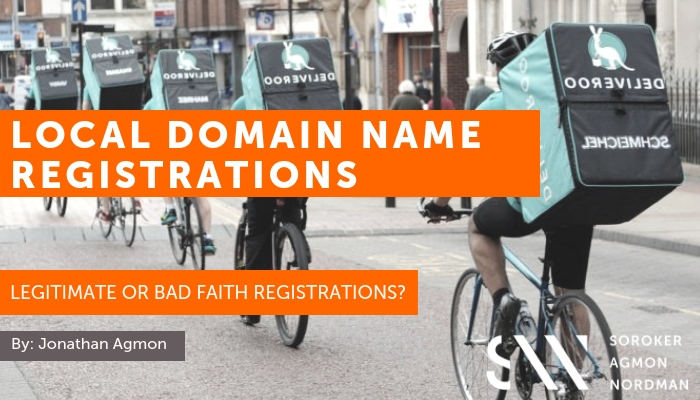 When is it legitimate practice to act on an opportunity to profit by purchasing a local Domain name that belongs to an internationally successful company and when is it simply bad faith?

What if you learnt of a business model that you truly believed would be successful in your country if only the service/product/application made its way over to your territory? Would you rush and buy the local domain name?

This might seem legitimate, as anyone can register any domain name. Seemingly it’s a “win win” for you – if said business wishes to enter the local market, you could find yourself either holding the key to establishing their local presence or at the very least they might purchase the necessary domain from you.

In 2018, in the case of RooFoods Ltd v. Hadar Cohen, a Panel of the Internet Society of Israel in a Dispute Resolution Procedure (IL-DRP) decided this is not a legitimate practice.

In 2016, An Israeli business man, having encountered the British technology based delivering service, “Deliveroo”, believed this model to be successful if ever it would immigrate to Israel. His first act was to register the domain name <deliveroo.co.il>. Armed with the domain name, he approach Deliveroo offering his services in establishing the Deliveroo business in Israel.

On discovering the infringement of their registered trademark “Deliveroo”, RooFoods Ltd. requested the domain name be transferred back to them, offering to pay Cohen only “out-of-pocket” expenses. Cohen, seeing this as an opportunity to profit, twice requested a fee, the second demand was later to be attributed with bad faith registration by the Arbitrator who stated that the fee is in considerable excess of documented out-of-pocket costs directly related to the domain name.

In November 2018, the ISCO-IL DRP Panelist ordered that the disputed domain name be transferred to RooFoods. The Panelist agreed with all RooFoods arguments stating: “it appears that in this case, there are multiple acts on behalf of the respondent which are indicative of bad faith both in registration and in use”.